Picture Perfect: This photographer and former model shows how the clothes make the man. 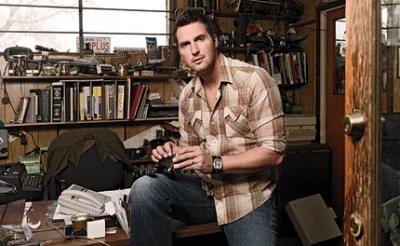 The Look: Jeans by 7, shirt by High Country Vintage, watch by Fossil, shoes by Converse


Pose. Point. Shoot. For almost 18 years Paul McGrath has been on both sides of those instructions.

As one of Mode Models’ beautiful people, McGrath has posed his way through such exotic locales as Hong Kong, Barcelona and Milan.

“I was scouted by [Mode’s] Kelly Streit and Gerard Yunker at a bar called The Bank, and in a span of a few years, was off on international assignments,” he says.

It was on those treks around the world that McGrath, now 37, indulged his true passion: photography. “The modelling industry is a whirlwind,” he says with a model smile. “You get thrown into a city, your agency gives you a map to your clients and off you go. You get lost a lot, but that’s part of how I got interested in photography — just walking around and wanting to capture the awe of the architecture and culture.”

It was on an African safari in 1998 that McGrath really showed his Annie Leibovitz potential, and as a result wound up becoming a test photographer for Mode full-time. “I was encouraged by a photographer friend of mine to show my photos to Kelly [Streit] and, as luck would have it, he thought they were pretty good and — excuse the pun — gave me a shot,” McGrath says.

These days, McGrath devotes most of his time to standing behind the camera with his business, PMG Image, and mastering his photojournalistic shooting style. “Sometimes I shoot without a plan,” he says. “I just think, okay, let’s go and give it a try. Sometimes serendipity creates some beautiful stuff.”

Modelling and photography are kind of like peas and carrots. What did you learn from this symbiotic relationship?
If models think that they suck, the photographer is going to know it first.

When did you first get the jones for taking pictures?
My parents got me these little tiny discs, one of the first revolutionary cameras that could fit into your pocket, and I would take all of these crazy shots of my cat.

What do you like to photograph the most?
Kids are amazing. You put a camera up to a baby, in particular, and they lean in and they look right through that lens, right into the camera . . . it’s beautiful. There are lessons to be learned from kids. They can be goofy and silly in front of the camera and they just don’t care at all.

What makes a good photograph?
Capturing a moment of time in somebody’s life that they’ll look back [at] in 20 years and feel the same thing they felt the moment the picture was taken.

A lot of your business now is weddings. Do you have a method you stick to?
I’m six-foot-three, but I try to be a fly on the wall. I’ll be walking amongst the guests, and very rarely in that situation do I look through my camera. I call it “running and gunning.” I become part of the crowd at that point.

The last decade has seen a shift to a more candid wedding-photography style. Has it been an easy transition?
Yes, but the grandparents don’t necessarily relate to the photojournalistic style, or understand it. You crop aggressively and you cut part of the bride’s hair off, and they’re like, “What have you done? Where’s the rest of her head?” I take additional shots to keep the grandparents happy.

You must have a lot of photos on your walls.
[Laughs] I’m like the shoemaker whose kids don’t have any shoes. We don’t have very many family portraits around the house.

Who do you admire professionally?
I admire the way that Bryce Meyer sees the world. And I can’t leave out Gerard Yunker. He’s one of the most dynamic photographers I have ever worked with. When I say I go into a job trying to get people pumped up, I learned that from
him. He taught me all about timing. And Andras Schram — I admire how he wants to give everyone his best, and I appreciate that.

How would you describe your personal style?
Easygoing. I will wear anything. If I have a pair of Chuck Taylors on, I feel good. You can do anything wearing Chuck Taylors. I actually search for them in every city that I go to.

Do you like to shop?
I love to shop for camera equipment [laughs] Other than that, yeah, I guess you could say that. I’m not an impulsive shopper, though. I’m a hunter, and when I see what I like, I grab it. I don’t randomly buy stuff. I also love to shop for power tools!

Power tools? That needs further explanation.
I guess you could call me a part-time carpenter. I was in Africa for a few months with a group of seven guys from Calgary building houses there.

Are you a Mr. Fix-It around the house, then?
I’m one of those personalities that likes to get things done, so I guess you could say I am.

Where do you like to shop?
I love vintage stores. My best find ever was an original Ramones touring shirt at a place called The Red Light in Portland. It’s one of those items that makes my
wife sigh and say, “If I have to stitch up that arm one more time, I’m going to lose it.” I lived in that Ramones shirt.

Is it still in one piece?
No, the sleeves are off it now, and it’s become my workout shirt.

Any other notable finds?
I found a vintage white-pearl-button cowboy shirt with blue flowers on it in Seattle on Second Avenue near the fish market. That went into the Tickle Trunk for a while and then I gave it to my brother-in-law. Sometimes you have to give away some of the jewels from the Tickle Trunk to make room for new finds.

I’m sorry, the “Tickle Trunk”?
I have a thing called the Tickle Trunk that I put special things in, like vintage shirts that I can wear with anything that I’ve picked up on my travels.

Who inspires your fashion choices?
My wife, Ariana. She is absolutely stunning, inside and out. I just try to keep up with her.

How did you meet?
On a Moxie’s ad campaign. We both said we would never date models, and now we’re six years married and expecting our first child.

What do you think is the greatest fashion accessory?
I love a girl in a hat, although not everyone can pull off a hat. And it may sound corny, but a smile. My wife says, “You’re never fully dressed with-out a smile,” and it’s true. Essentially, you can wear whatever you want to wear, just wear it with confidence, a smile on your face, and you’ll make other people believe it.

Do you have a shopping weakness?
I love watches. I restrain myself, but I have a few. Definitely not more than what I want! I also love sunglasses — Ray-Bans more often than not, but I also loved this pair of silver
Randolph aviators I bought from Crown Surplus in Inglewood. I wound up sitting on them and breaking them. I was so broken-
hearted, I think I even cried a little but hid it from everyone. I’ve been searching for another pair ever since.

Bands:  The Killers and Coldplay

Song:  “All These Things that I’ve Done,” by The Killers