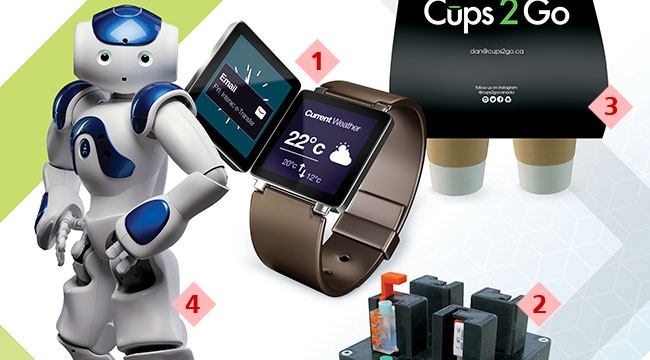 Meet MEDI, Doppio, Fred and Cups2Go. There’s a robot that acts as a pain coach, a dual-screen smart watch, a biosensor system and a nifty cupholder. Discover who’s behind these innovations.

The Doppio is a dual-screened smart watch — a name inspired by a double espresso shot of coffee. The second screen aims to solve one of the challenges of interacting with a smart watch: its small screen size. Rotating the second screen allows the user to not only switch between apps, but the screen’s different sides can show just parts of an application, such as an extended weather map or forecast. Teddy Seyed, BSc’11, MSc’13 (now a third-year PhD student), is developing Doppio with collaborators from Waterloo University and Dartmouth College and is pitching the prototype to large companies in China.

FRED stands for Field Ready Electrochemical Detector. This unique biosensor system uses bacteria that can be tuned — genetically modified — to detect trace amounts of different types of chemicals in water samples. The bacteria are contained in a consumable cart-ridge. Start by injecting a water sample into the cartridge at the site, then place it in the handheld detector. Next, press the start button and, one hour later, you’ll receive (wirelessly) the data on your mobile device or computer. FREDsense Technologies, which was co-founded by CEO David Lloyd, MSc’13, will launch its first product, an arsenic testing unit, later in 2017.

Cups2Go is an innovative, paper-thin cupholder design that’s a boon to moviegoers and sports fans as it allows patrons to easily transport beverages. The spiffy unit is able to carry two cups and a consumer can easily handle multiple units, if needed. The Cups2Go holders also have a large marketing space for companies to display their names and logos. Founder Daniel Schneider, a business student whose Cups2Go idea won first prize in the Hunter Centre’s RBC Fast Pitch Competition, was inspired to create the product because he thought the current drink trays were ugly, flimsy, awkward and, overall, a bad design.

A.k.a. “Medicine and Engineering Designing Intelligence” is a two-foot-tall robot that acts as a pain coach to comfort children during painful or intimidating dental or medical procedures. MEDi robots can speak 20 languages and are programmed with sets of behaviours that match the steps of a procedure. Let’s say a child is about to be given an IV. Simply click IV “start” on the tablet which will deploy MEDi to walk, give high-fives and dance — anything to coach and encourage the child. MEDi inventor Tanya Beran, PhD’02, named her startup company RxRobots because she thought of the robot as a prescription for pain relief. U