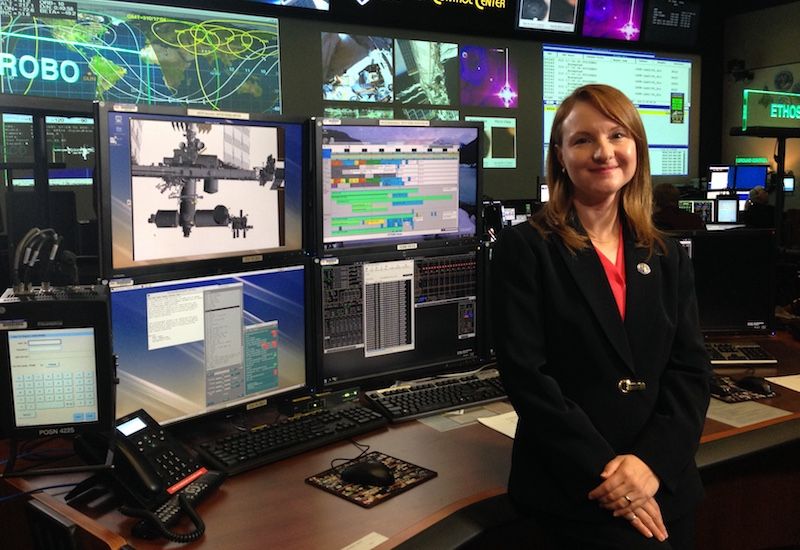 Laura Lucier worked at NASA’s Mission Control Center in Houston, Texas, before deciding to attend the University of Calgary after learning she could take part in both ventures thanks to solutions from the university. Photo from NASA.

Laura Lucier could have done her PhD in a lot of places — perhaps MIT, or Stanford, or all the other academic hubs of robotic engineering. After all, that’s what working as a robotic officer at NASA’s mission control headquarters gets a person: choices.

Lucier — a Canadian who’s also a pilot and aspiring astronaut — had a different idea. She’s doing her doctorate at the University of Calgary, an institution that’s building quite the reputation lately as a rising innovation hub, thanks to a combination of being fast on its intellectual feet, coupled with a rather illustrious alumni roster, which includes James Gosling (inventor of Java) Garrett Camp, (co-founder of StumbleUpon and Uber) and Bruce Livingstone (founder of iStockPhoto).

During one day in Calgary, Lucier was being taken on a tour of the robotic engineering lab at the university. She knew from her previous academic experience (as a U of C undergraduate and McGill graduate), along with her father’s career as an academic at the University of Calgary, that for every doctoral candidate at a university, there are seminars to attend, sessions to teach and various other duties to fulfill in order to receive a PhD.

But the laboratory researcher systematically demonstrated how it was actually possible to keep her cool day job at NASA in Houston while pursuing her doctorate at the University of Calgary remotely, over the Internet.

Lucier says “every kind of roadblock in my head” was addressed by the university, and so, she signed on.

Lucier, who has twice been shortlisted by both Canada and the U.S. to enter the astronaut program, is in the third year of her doctorate program and hopes to complete her PhD within a year or so. She says the school and her academic and professional aspirations were a good fit together.

“Their ability to be innovative and to find solutions and to encourage a student to do something in a non-traditional way, not a lot of other schools, I think, would be that flexible and accommodating,” she explains.

Meanwhile, another U of C doctoral student, Teddy Seyed, was working on his PhD project, Doppio, a dual interface smartwatch, when he asked Kris Hans for some business advice.

Hans, who teaches business management at the University of Calgary and business communication at nearby Mount Royal University, is the entrepreneur-in-residence at W21C, a University of Calgary health care systems research and innovation initiative on campus, where his role is to help transform bold new ideas into commercial possibilities.

“A lot of these researchers, doctors, clinicians, engineers — they are not looking to commercialize,” Hans says. “They see a problem, and they try to go and solve it. A lot of times, they don’t see that (commercial) potential (in their innovations) — so my job is to go and provide that business sense.”

One day, following a presentation at a conference, Doppio was featured on the website Gizmodo. Suddenly, Seyed’s dissertation became an object of public curiosity.

“I started getting emails asking, ‘Hey, where can we buy this or when can we buy it?’” Seyed says. “And then I was like, ‘OK, maybe I should actually consider building this for real.’”

With Hans’s mentorship, Seyed adjusted his PhD to an entrepreneurial thesis — the university’s first — which meant developing a business plan in addition to his academic research. Working with Hans and Sonny Shoker at Calgary-based company Market Grade, Seyed is focusing on the possibility of marketing the Doppio to doctors and nurses as an alternative to the old school pagers a lot of physicians still rely upon.

Seyed turned down a job offer from Microsoft and has been to the Google campus to deliver a speech about his work, but says he prefers to complete his project at the U of C.

“I get a lot of offers to come down to Silicon Valley and build it there,” he reveals. “But I’m from Calgary. I’d like to build it in Calgary.”

That innovation orientation is partly new and partly built into the DNA of the institution, according to Gosling, who started hanging out in the university’s computer science lab as a Calgary high school student.

“I was incredibly lucky,” Gosling says via email. “Between the physics and computer science departments, I got in with some great people who were doing amazing stuff.”

Part of that innovative culture may stem from Calgary being the Canadian energy industry capital, a city filled with engineers and geologists, explorers of another kind who, when you think about, have a few things in common with space explorers such as Lucier and her NASA colleagues.

“Robotic pipe inspection and undersea exploration and all of that uses very similar technology to what we use in spac,” Lucier explains. “These rough and tumble guys, going out in the field, looking for places to exploit and explore and expand to is maybe a little bit like our exploration of the universe.”

Also, oil folks are used to drilling nine misses to hit the tenth, which space explorers also can relate to— not to mention computer scientists, entrepreneurs and business owners, all of whom are trying, with varying degrees of success and luck, to transform Calgary’s core identity into something new.

“Space exploration is very much the same,” Lucier says. “There’s a lot of attempts at things and exploration of things that don’t pan out before the one thing that does comes to you.”